Preposition "on" and noun combinations

Welcome to another episode of the Art of Business English, this is episode 69 and the third and final part of my mini-series on preposition and noun combinations.

If you haven’t had the chance to listen to the previous two episodes, then I encourage you to go back and listen to them. I offer a very useful list of vocabulary and expressions.

Let’s take a look at what we are going to cover today. I will follow the same format as in previous episodes.

Before I start, I hope you’re enjoying this series and if you have any suggestions or there are some areas that you would like to understand better then just send me an email and I will be more than happy to put something together for you.

As with the last two episodes, I am going to give you the list as well as the translation for each of the preposition and noun combinations.

“On” + noun combinations in use

In today’s list I have provided you with 23 combinations. Now I will give you some example sentences to really put these expressions into context.

So, there you have it, the final part of my three-part mini-series into preposition and noun combinations.

If you want to study this material further, then head over to the AOBE website. You can sign up for the transcript or take a look at the video of the episode.

I hope you have found this mini-series useful and I hope that I have clarified the correct use of some of these expressions. There are some really common mistakes made by non-native speakers particularly when trying to use the correct preposition. Remember, these are fixed structures, so you just need to learn and memorise them.

If you are listening to this episode in March of 2019 then this is just a quick heads up to let you know that we are redesigning the Art of Business English website and it should be ready by the end of the month. To co-inside with the launch of the new website we will also be launching some new courses and members benefits. I will look forward to your feedback.

Well that is all from me, I hope you have a great week. Bye for now.

This six module course helps English language learners build their knowledge of business idioms and their understanding of them in different business scenarios.

We cover idioms for marketing, finance, behaviour, operations and production, manegament and planning.

GET THE COURSE NOW! 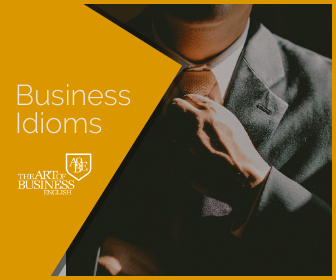 By using AOBE, you agree that we may set cookies for purposes such as customising content and advertising. Find out more.